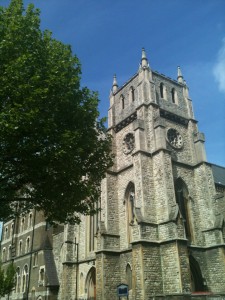 The Westbourne Neighbourhood Association (WNA) comprising the square encompassed by Chepstow Road, Artesian Road, Ledbury Road and Talbot Road, came into being about forty years ago in order to fight a citizens’ campaign against losing one of the streets contained within that square.

The Council had formulated a plan to build an arterial road from Harrow Road southwards which would pass through St Stephen’s Gardens across Talbot Road and would then eliminate Moorhouse Road as a residential street and plough on southwards to Notting Hill Gate. A handful of residents banded together and eventually formed themselves into a committee which in turn became the WNA. The campaign was successful – the Council plan was abandoned. The neighbourhood association continued as a cohesive voice for those living in the area and has endured to the present day.

The WNA helped establish and save the little park Shrewsbury Gardens and was involved with the restoration of  the small park in St Stephens Gardens. The WNA has also campaigned on road safety issues, quieter buses and in campaigning against Cross Rail using Chepstow Road as a route for getting rid of spoil.

Quite a few of the original committee members are still active in the WNA and now NHENF.